He certainly was not born to the fanfare a young prince might expect. In fact, we missed his arrival altogether. Yet here he is, royalty from the Old World, soaring ten feet into blue skies and spreading four feet at the ground, graciously enveloping, well, smothering, his subjects.

The adult king, reaching for the sky in July

The previous summer our daughter-in-law had given us several small mullein plants. I was thrilled. I had wanted mullein ever since I had seen it spontaneously marching up (invading) a hill at Chanticleer, a Pleasure Garden near Philadelphia.

I have friends who like mullein, too. There, I was doing it again. Dreaming of magnificent mullein in our garden and being a glad hand with whatever grand mullein I couldn’t use. I hadn’t even planted the starts. 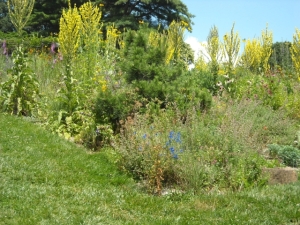 They all died. They turned out to be a persnickety bunch of wimps. Some of them resented being plunked in a strange garden under hot summer sun. Did these macho dry-soil types really expect to be pampered?  Others melted in cold winter rains. Chalk them all up to another Garden Checkmate. (I think this was Garden Checkmate Number 247, or maybe two thousand forty-seven, I can’t remember.)

And then next spring, quietly, King Mullein arrived. No parched stony patch for him. Nosiree, nothing but the best for this monarch. He landed in a compost pile-turned-garden bed that we had just replanted, best spot in the yard, once home to elephant ears so immense they could have been dinosaur food, now elbowing a fledgling kerria and hosta honeybells. I guess he figured they’d be his handmaidens.

Since we weren’t expecting him, we totally missed the first sign, a tiny rosette, probably sprouted in late fall—amazing how blind we can be—and never noticed him until he was quite the dandy, some time in June. Beats me how he found such a good spot. It was nowhere near his vanquished kinsmen.

He didn’t belong where he was—he wasn’t part of The Current Plan—but oh well.

King Mullein in his prime

He was alive and growing, which was more than some of his neighbors were doing. We ceded the territory to him. Isn’t that the way with kings? They pretty much do what they want and still  subjects  bow.

To be fair, His Highness was no wimp. Velvet leaves almost two feet long covered with fuzzy branched hairs cloaked half his ten-foot spire. They made cozy umbrellas for beetles, spiders and frogs,  and, like the egos of king and courtiers, they begged to be stroked.

Yellow blooms, tight to the stalk, began in June and continued through July into August. Lesser stalks, courtiers, I suppose, surrounded the tall spire as faded blooms produced seed capsules that spilled over with royal seed. Is an invasion of our garden imminent? 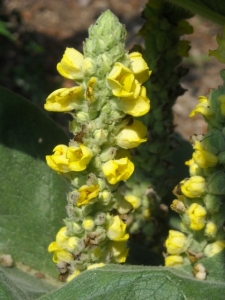 Now, in late August, King Mullein is an aged monarch. His fine rosette shriveled long ago. His velvet leaves are splotched yellow, torn, chewed, bored through, or shrunken from prolonged drought. If we’d been quick-witted, we could have made poultices and decoctions from them to cure all sort of ailments: COPD, ulcers, tumors, piles and kidney infections. They did this in the old days, only they didn’t call it COPD back then. We have none of these complaints, so we had no reason to experiment.

The flowers are gone, too. In a long-ago time we might have soaked them in mineral oil to soothe earaches or cure warts, or steeped them in lye to dye our hair. But we had no earaches or warts and we weren’t in the market for yet another hair-care product. Instead, we were happy to watch bees and wasps foraging.

Quite beautiful, the five-petaled flower has five stamens that promote self- pollination and assist bees in their work

All in all, King Mullein seems to have been quite a handy plant to have around years ago. When the need arose, perhaps during a funeral procession, his spire could be dipped in tallow to make a great torch. (We’re not tossing our LED flashlights yet.)

Having served his time, the hoary king seems ready now for an off-with-your-head moment, a borrowing of ancient ritual to keep royalty under control.

The old king may be gone, but we wonder when the  grand invasion by the minions will begin. Along what path,  in what flower bed will we discover them? When will seed

The wonderful velvet texture of the leaves have inspired many common names: Donkey’s, Cow’s or Bunny’s Ears, Flannel Petticoats, and Cowboy’s Toilet Paper. We could add another: Crepe Paper Mulch, for the dried up leaves flat out at the base keep the ground cool and bar weeds.

capsules open to release hundreds of thousands of tiny seeds? We’re counting on goldfinches to do their bit and cut down the numbers.

I understand that the wand given to Ulysses by Mercury to protect him against Circe’s enchantments may have been a spire from a common mullein. I guess a plant that’s been around since Homer wrote the Odyssey deserves an occasional spot in our garden. So long as he behaves himself.