Posted on November 6, 2010 by aheronsgarden

We had great expectations for gardening when we moved to eastern North Carolina. Sunny skies, balmy winters, how could our garden not be a perfect example of the manicured photos we envied in garden magazines? Our experiences, we soon discovered, would turn out to be quite different.

We began our adventure by hurling heavy gray clods at trees. If they crumbled, we assumed they were clay; if not, they were probably chunks of concrete left over from building our house.  Sometimes we couldn’t be sure which was which, and sometimes we couldn’t be sure which was worse. In case you are wondering, the trees survived just fine. Our creaky pitching arms? Well that’s a different story.

There was no over-all plan. A year before we left Long Island, we had begun

collecting plants for our new southern dream garden. We didn’t aim to do a remake of the Beverly Hillbillies’ move to California. But by the time we finished stuffing just one more plant into our capped truck, vainly capturing unruly tendrils and stems, we were doing a petty good imitation. The plants, aghast at having to spend the rest of their (short) lives in their new baked-clay sun-scalding environment soon looked like wilted spinach. We quickly developed Plan A: Keep those plants alive. There was no Plan B.

Creating a path to the front door seemed like a practical approach, especially since the back entry was five feet up from the ground and still needed a stairway. That would have to come later, assuming that neither of us, in a dithery moment, opened the kitchen door, stepped out into thin air and broke our necks.

We learned much later that we had built our new home near the tip of what was once a swamp finger, a small strand tied into an elegant network of swamp fingers that slowly drained higher land. To create our community, the developer scooped out swamp fingers and voila! canals and boat slips appeared. 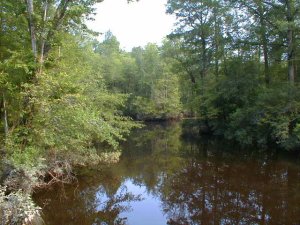 The wild banks along our canal

The wetland waste was dumped on the edges of the new canals. Bulldozers razed most of the woods and sculpted higher ground into building lots, roads, verges and ditches. All this was done in 1970, two years before the Clean Water Act passed in 1972. Such atrocities would not be permitted today. Perhaps.

Soil on higher ground turned out to be slippery silly putty after a rain. We learned this the hard way. No broken bones, though. In dry weather the putty turned to concrete; hence the pitching practice noted above.

The lay of the swampland didn’t encourage gardening, either. Except during extremely dry summers, the water table was high, maybe a foot or two below the surface, not especially appealing to plants without boots for their roots.

Apparently, in the years before our arrival, plants and animals were unaware of these stumbling blocks to land management. Self-sufficient, they carried on quite well without help from outsiders–once the bulldozers departed. 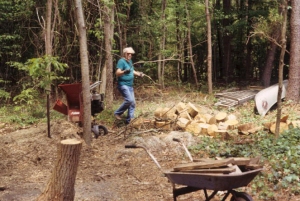 Bob clearing behind our house

By the time we took possession of our acre-plus plot in the mid-eighties a jumble of spindly pines had grown up, competing for sun with canopies of grapevines and brier. The woods seemed dark and lonely to us. Except for some scattered mussel shells and occasional unidentifiable bones that only reinforced the mystery, there seemed to be no sign of the living.

It would take time and patience before the wild secrets unfolded. Our first halting attempts to create a garden on land that should have been left to its prehistoric origins would keep us forever humble.